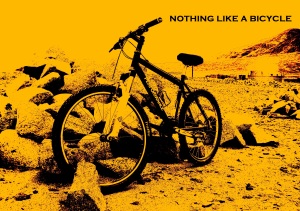 The shutters of the shop window went up.

Ladakh’s pure sunshine lit up a modestly big space within. There were shelves to stock things and on the wall was a line of hooks to hang bicycles. One could imagine a counter for the manager and space around to park more cycles.  “ What do you think?’’ Tsering Sonam asked.

Besides trekking, mountaineering and river rafting, Ladakh is identified with cycling.

The Manali-Leh cycle trip is a much sought after attraction. Cyclists wishing to be off the beaten path explore less known, equally engaging routes. Tourists to Leh, especially those into the active lifestyle, often hire cycles from the town’s clutch of shops renting out mountain bikes. For a daily fee, rather stiff by the standards of yore (but then you are on a geared bicycle), you get a pair of wheels to go around town the healthy way. If you are serious cyclist who left his bike behind and travelled light to Ladakh, you can hire a mountain bike for a long trip across the region, including auxiliary services like camping gear, mechanic and support vehicle. Leh’s bike rental shops help you with that.

By the end of the 2015 tourist season, a missing link in the town’s cycling infrastructure will be addressed. Leh is set to get its first shop that will retail modern, premium bicycles. The town has a couple of shops that sell cycles manufactured by the traditional Indian bicycle companies. The new shop will deal in premium bicycles, essentially the imported brands finding favour with those into the active lifestyle. These are also the bicycle types defining Leh’s cycle rental business. 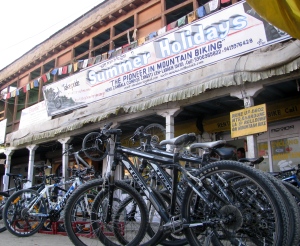 Leh’s cycle shops have gone through their ups and downs. The first to come up was Summer Holidays, in June 2006. It was begun by Stanzin Dorje, who had long been associated with the travel business. Joining him was his nephew Konchok Namgial. The initial fleet was a dozen or so used mountain bikes brought from Delhi. It was a phase fraught with teething troubles. Abused by customers in Ladakh’s rough terrain, the bicycles frequently broke down. Complicating matters was the issue of maintaining these bikes, quite different from the regular Indian-made bicycles. Neither did many in town know how to repair these relatively complicated models nor were spare parts easily available. It was a learning curve. Sumer Holidays was helped by two factors. First, Stanzin Dorje, who during his earlier times with the travel industry (he worked for a Delhi based-company) had led cycling groups elsewhere in India, was familiar with some of the work. Even today, he is one of the go to-persons in Leh for the skilled job of wheel-balancing. Second, Konchok Namgial began learning the craft of maintaining bicycles. To catalyse the process, Summer Holidays brought a mechanic from Delhi to Leh. However the market presence of premium bicycles in India at that time was so limited that the mechanic turned out to be inadequate in skills. The route ahead was clear – it will be learning by doing. Namgial soldiered on. According to Tsering Sonam, Namgial’s brother, in the wake of Summer Holidays opening shop several other similar establishments had commenced in Leh. But the ability to maintain a fleet proved a force of natural selection. Some shut shop; a few survived. Summer Holidays was among those that made it through. 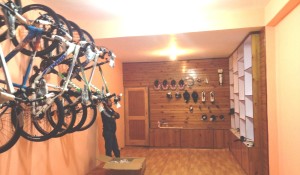 As the market picked up, the shop’s fleet changed. In 2007, a foreign tourist gave a Trek 3900. Encouraged by the bike’s performance, Summer Holidays bought a clutch of Trek bikes from Delhi. This was followed by a handful of Merida cycles. The shop’s business was also helped by a product in Leh’s cycling experience it popularized. India has many high mountain passes. But Khardung La, near Leh, is distinct as the highest pass with a road through it. After coming to Leh, it is common for tourists to drive up to Khardunga La. Motorcyclists and SUV enthusiasts drive all the way from the plains to be at Khardung La and have it recorded for posterity in a video or photograph. Needless to say, Khardung La attracts cyclists. The product Summer Holidays popularized will irk the purist among cyclists but it caught the fancy of the recreational lot and the tourist seeking fun. The proposition offered was simple – drive up to Khardung La and then roll down the road on a bicycle, all the way to Leh. A mix of this product, daily rentals for cycling around town and long trips, kept Summer Holidays going. Today, in tourist season – essentially the months spanning Ladakh’s summer – Summer Holidays is a busy shop. “ In peak season, at least 20-25 people hire cycles every day,’’ Tsering Sonam said.

Summer Holidays now has an inventory of over 80 premium bicycles of which around 50 are in business. The balance is victim of a problem faced acutely in Leh given its remote location and if the cycling enthusiast elects to dig deep enough, likely elsewhere in India too – availability of spare parts. In fact, the idling cycles are sometimes cannibalised for spare parts to keep the rest of the fleet functional. This is one of the reasons inspiring commencement of a new, proper multi-brand bicycle store. Besides selling bicycles, the shop will stock spare parts and offer servicing to those in need of it after cycling to Leh from far. Tsering Sonam described an arrangement whereby the sale of cycles and spare parts happens from the new shop and the business of renting bikes and servicing of bikes continues from the old Summer Holidays location. 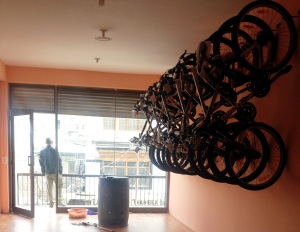 Some other factors too fuel the plan. In the decade since Summer Holidays opened shop in 2006 the Indian market for premium bicycles has evolved considerably. This evolution of the market shows in Summer Holidays’ fleet, which has both added brands (Giant being the new addition) and grown diverse in terms of bicycle specifications. Besides the regular sieving (which we are all used to as customers) based on thoroughly used cycles and the relatively new ones, the fleet for rent can be differentiated on the strength of number of gears, quality of derailleur, V-brakes, mechanical disc brakes, hydraulic disc brakes, adjustable suspension, suspension that can be locked out, suspension that can be remotely locked out etc. Intended application – whether local riding, going to Khardung La or cycling long distance – influences the quality of bicycle chosen and likely thereby, the hire charge. Unlike before customers nowadays are cognisant of technical subtleties. From a pure business perspective, there are people now willing to spend for acquiring a good geared bicycle. Such market evolution plus the profile of tourist visiting Ladakh – typically a person loving the active lifestyle – prompts the shop’s promoters to think that somebody may elect to buy a good bicycle in Leh. More relevant for business plans: over time, as the town’s bicycle shops grew, they not only enhanced their fleet size but also sold ageing cycles locally contributing to a rising base of used premium bicycles in Leh. Adding to this growing mass has been the occasional sale by the foreign cyclist passing through, who after a long journey done, chooses to sell or gift his / her bicycle. This local base of bicycles provides a captive market for spare parts, not to mention, potential aspiration by their owners to upgrade. 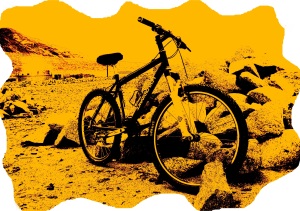 Finally there is the truth that cycling is an environment friendly way of getting around, anywhere. Ladakh at an average elevation of over 9800ft is the deep end of the need to maintain a clean environment. Already in its thin, still air, vehicle exhaust and the smoke from shop generators are sensed by the human nose with a clarity that is more profound than how you sense the same in the plains. In Ladakh, vehicle fumes stand out. According to Tsering Sonam, the town’s renovation plans currently underway have it that once the main street and market have been done up, it will become a traffic free zone. Such moves provide oblique encouragement for cycling and highlight its environment friendliness. The proposed new bicycle shop in Leh, near Axis Bank and opposite the local office of the Life Insurance Corporation (LIC), hopes to tap into all this. Like other towns, Leh has a cycling club now and Tsering Sonam envisioned something similar attached to the new shop as well.

(The author, Shyam G Menon, is a freelance journalist based in Mumbai. Please note: in the Indian bicycle market geared bikes, MTBs, hybrids – they all fall in the premium category. For an overview of the market please try this link: https://shyamgopan.wordpress.com/2013/08/24/cyclings-second-youth/ )