Fanaswadi was a village with two lives.

“ At the earlier location, there were no facilities. There was no doctor, no water, no electricity,’’ Kamlya Joma Bhagat said. In 2011, the village started shifting to where it is today. According to him, the old village survives, mostly abandoned except for four families who continue to be there because the elders didn’t wish to leave the land they had lived off for so long. The agricultural fields belonging to Kamlya’s family were also at the old location. He visited his former residence when required. The new and old locations of the village were apart by roughly five kilometres, separated in the main by a hill. Pale Budruk – that was the name of the area where Fanaswadi’s second avatar sprouted. When you took one of those three wheeled share-taxis from Panvel, you didn’t just say Fanaswadi; you said Fanaswadi-Valap to indicate which Fanaswadi you were talking of.

Half an hour or so from Panvel we got off on the road. Fare paid, the taxi proceeded on its way leaving us next to a board from below which a path of baked brown earth, now rendered powdery by the fierce summer of 2015, wound its way up to a rather spread out cluster of huts and mud houses. Some ways up, a wiry young man of medium height greeted us and took us to his house – all of one room and a sit-out. Behind the hut was the hill separating Fanaswadi’s two lives. Up front and far away, the hill between Kharghar and Belapur loomed, large and faint. Somewhere in that dark outline of hill was Pandavkada, the popular waterfall, right then possibly awaiting the rains to come alive. In front of that hill lay the urban sweep of Kharghar and the factories of Taloja’s industrial zone. At a tangent from the houses we were at, through the summer haze, the rocky top section of a hill was visible in the distance.

The new Fanaswadi sat unsettled on land the families on it were yet to own. They had moved here because they were desperate to be near basic amenities. Technically the land was owned by the government. Apparently there was legal action going on. There was no water and electricity here too. Observations on life were tinged by a neither here nor there vagueness; a smile and a faraway gaze to avert the impact of that uncertainty. At Kamlya’s house a metal sofa had been dressed in a clean sheet for us to sit.

We sat down to hear his story.

Kamlya was born in the old Fanaswadi to a family engaged in agriculture. He was the youngest of six siblings. His father died when Kamlya was still a small child. The family primarily grew rice and nachni (finger millet); they also grew vegetables. Kamlya worked on his family’s land. He also worked on other people’s land as did others in his family. Much of the farm produce at Fanaswadi was meant for use in-house. That was how life amid meagre income was managed.

From the age of five or six onward Kamlya attended the Aadivasi Aashram School at Chikhale near Panvel, where he studied till the tenth standard. It was a residential school where the cost of education was met by government. In class eight at this school, Kamlya had his first formal rendezvous with running. It was a 1500 metre-race, which he had to quit with 100m left due to cramps. He had run without any practice. So over the next couple of years he kept running regularly in the range of 5-15 kilometres. Kamlya attended junior college at the Sanjay Gandhi High School in Kolwadi and then joined MPAC College in Panvel to do his BA (Geography). By now the funds for his education were a mix – it came from his family; it also came from his pocket as Kamlya was additionally working at a shampoo factory in Taloja. The distances he ran had now grown to 20km.

In the second year of his three year-degree course, Kamlya secured second position in cross country running at the Mumbai University level. According to him, across his college years, he won 28 medals in disciplines ranging from 1500m to cross country running. He even ran the 4x400m relay. At MPAC College, he practised at the college ground. Sometimes he ran to college from the shampoo factory he worked at. He also ran at University Ground in South Mumbai. Representing the university, he ran at venues outside the state, in Bengaluru and Andhra Pradesh. Kamlya said he had been to four or five inter university meets. Sports elicited a toll on studies. Kamlya never gave his final year BA exam. Academically therefore, the runner from Fanaswadi stopped a shade short of graduation. There were other developments. In his second year at college, Kamlya got married. By the third year, he was a father. Today he has two children, a boy and a girl; one of them suffers from a congenital heart problem. The family also lost one child.

Kamlya, his wife Kalpana and their children, Prathama and Raj, in front of their house (Photo: Latha Venkatraman)

It was during his first year at MPAC College that Kamlya had his first taste of the half marathon. By the second year, he was enjoying the format but remained an athlete in a basket of disciplines. After leaving college Kamlya ran a half marathon, barefoot, in Kalyan. Since then, he mostly ran the half marathon. The distance was a sweet spot for him. Given his backdrop in college running a variety of distances all the way up from the 4x400m relay (he said he could do 1500m in 4:10-4:12), the half marathon allowed him to tap his innate affection for speed. Kamlya estimated that he must have run over 150 half marathons by the time we met him. That prolific running was due to another factor. When Kamlya left college, he was married and having wife and child to support. He couldn’t get a job. There was nothing available. All he had to fall back on was running. Slowly racing became a source of livelihood. These races were typically organized by individuals and organizations ranging from local legislators to elected bodies and others. They happened mostly in the winter months. A good runner, Kamlya was confident of winning races in Raigad, the district he belonged to and lived in. Running almost every week, in a good season, he was able to earn up to Rs 50,000. A modest amount, it nevertheless meant much for the family. Except rice which they grew in their fields, they needed to purchase most other things.

The races made Kamlya locally known. “ I saw his name in a local newspaper. Then I met him in one of the races in Navi Mumbai. We shared our numbers. I called him for a run and he came to Panvel an evening. That was the first time I ran with him. Later I went to his place to run. There we ran on trail. It was very beautiful,’’ Dnyaneshwar Tidke, one of the best known runners from Panvel said (for more on Dnyaneshwar please see https://shyamgopan.wordpress.com/2015/04/11/the-constant-runner/). Although he did his practice runs wearing shoes, Kamlya ran the races barefoot. “ I don’t know why,’’ he said. His runs in and around the new Fanaswadi settlement included running on the road we had come by and extended trail runs on the hill behind the hutment. As regards coaches, there was a “ Shinde sir’’ at MPAC College and a “ Sushil sir’’ at the university. No other names came up.

A seemingly self made runner for the most part, Kamlya’s Fanaswadi address was also miles away from the Mumbai locales where the city’s running coaches trained their wards. But running and runners graced Kamlya and Fanaswadi differently. News of Kamlya Bhagat got around in the running community. For instance, Chetan Gusani, a runner and photographer, was collecting shoes for needy runners when Dnyaneshwar told him of Kamlya. In June 2014, Chetan enrolled him for a 10 km race in Thane and asked Kamlya to stay at his place as it was closer to the venue. Chetan recalled the episode, “ he came over. At night I asked him if he was comfortable. He said he was very comfortable as in his own house he did not have electricity. Next morning, he ran the 10 km-race and finished second in the open category.’’ Chetan put a post on Facebook about Kamlya. Help started coming in. Fellow runners got him shoes, footed his registration fee at races. At a Fanaswadi still devoid of electricity, a line of LED lamps powered by solar energy lined the pathway to Kamlya’s house. The lamps had been provided by a group of runners. 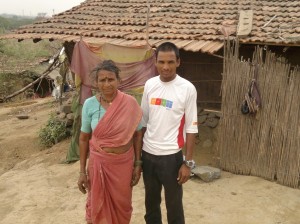 As much as the half marathon emerged a sweet spot for Kamlya, it also appeared a limitation. The 28 year-old (according to Kamlya his legal age is slightly higher) fared strongly in the half marathon viewing it as a longer, stretched version of the middle distance runs he used to do before (and still does well as the outcome of the 10 km shows). At some point, Kamlya knew the same logic of adapting to age and endurance will prod him to try the full marathon. As yet he had neither attempted the full marathon in Mumbai’s annual Standard Chartered marathon (SCMM; India’s biggest such event) nor had his one attempt at the marathon, succeeded. In that latter attempt – a night marathon in Surat – he gave up after a half marathon and some more done because the run wasn’t progressing to his satisfaction. He required better endurance.

Given Kamlya’s predicament, wherein running is also a source of livelihood, satisfaction for him is probably several notches above what satisfaction is for the rest of us. He can shift disciplines only if performance is satisfactory. Further, he believes that he won’t be able to transition to the full marathon from the half without affecting his existing fortunes in the half. For example: to run the full marathon he may likely have to run slower as it spans a longer course. Do that in training several times over, how would it be if he suddenly required to a run a half marathon for money? Won’t he run slow and lose his chance to win? Not to mention: competition was emerging in Raigad. He may want the marathon but he can’t upset the income stream from the half marathon. This was Kamlya’s worry. At the same time, he knew the inner clock was ticking; he won’t stay fast forever. He hadn’t therefore shut the doors on the full marathon. “ I haven’t said no to it,’’ he emphasized. Finally there was the issue of shaking up a whole ecosystem. When we met him, Kamlya was also working as a temporary teacher at a school some distance away. Somehow the half marathon had come to fit in well in terms of the time he was able to spare for running, training and the resources he could invest in his passion, including food intake. Is it worth upsetting the equation?

Kamlya was unsure: should it be the half or the full?

“ I think he can be a full marathoner provided he trains regularly,’’ Dnyaneshwar said.

Maybe one day, like Fanaswadi before, Kamlya will step out into a second life with the full marathon.

(The authors Latha Venkatraman and Shyam G Menon are independent journalists based in Mumbai. Please note: race details, timings, performance at meets and number of medals won are as provided by the interviewee.)