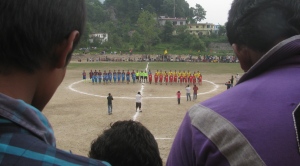 For a fortnight every June, a playground in Munsyari draws crowds of people.

They are residents of Kumaon’s Johar Valley and members of its far flung diaspora. Kumaon is the eastern half of the Indian state of Uttarakhand; Munsyari is in north eastern Kumaon.

June is Johar’s month of annual get together.

The magnet is that playing field.

June 2014, it hosted competitions in various sports. Evenings featured football, coincidentally befitting the times, for as the local competition peaked to final by mid-June, in far away Brazil the 2014 FIFA World Cup got underway. It became Munsyari’s season of football within global season of football.

Munsyari’s football however went beyond the sport.

Over 60 years ago, in 1953, a group of students from the Johar Valley studying in Almora, started the Johar Club. Their idea was to get together, keep the Johar in them alive through sports. Thus was born the tournament. The first sport it featured was volleyball. For the next three years, this annual ritual was hosted in Almora. In 1956, it shifted to Munsyari. It has remained there since.

According to Sriram Singh Dharmshaktu, Secretary, Johar Club, the inaugural tournament in Almora drew half a dozen teams or so. By 1956, this grew to around 20, mostly local; including teams from villages like Darkot, Bunga, Sarmoli, Suring, Dumar and Jalat. The variety of sports also grew to encompass volleyball, football, carom, chess, table tennis, badminton etc. Soon, teams from outside Munsyari started coming; among them – Lucknow, Delhi, Bageshwar, Thal and Didihat. No matter where a team was from, one thing stayed common – its members hailed from the Johar Valley.

This year (2014), the tournament had 16 senior teams and 15 junior teams, including school teams. For the first time the event also featured girls’ teams with four teams registered to play football. These all girl-outfits were named after well known adventurers – Bachendri Pal, Chandraprabha Aitwal, Sabita Dhapwal and Reena Kaushal Dharmshaktu. Further, in what was probably recognition of the growing popularity of running in India, there was a 15 kilometre-run from Munsyari to Darkot and back. There is no age restriction for senior teams. It was visible for example in the volleyball final, where a mix of youth and age fought an engaging match.

In the Himalaya, cricket is popular. If you are frequent hiker, you would have seen villagers playing the game. A good hit typically travels down several terraced fields or tiered slopes of a hillside. The fielder chases the ball and often disappears from view in the undulating, steep terrain. A powerful throw from below returns the ball to frantic teammates on the pitch. The fielder then climbs back up. In a single game, there would be many players repeating this process many times over. In mountains, big, flat spaces are hard to find. Some villages are lucky. They have a playing field. There are regular inter-village cricket tournaments. Shields and trophies find pride of place in a victorious village; I recall seeing a big shield displayed at a village temple in the western part of Garhwal bordering Himachal Pradesh. I also remember youngsters’ sorrow at a Kumaon village, after the nearby river which flooded in monsoon, washed off a portion of their flat field.

Probably because cricket has its own established circuit, the sport wasn’t part of the Johar Club’s annual tournament. Big ticket sport here was football, followed by volleyball. 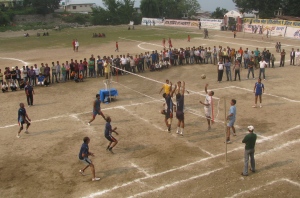 Munsyari is small enough for most people to know each other. Well known mountaineer and Padma Shri recipient in 2014, Love Raj Singh Dharmshaktu, hails from Johar. June was his month to be home too. A local hero and chief guest for an evening’s football, he was formally received in town and taken in procession to the stadium. Years ago, Love Raj had been on a team playing football at the same annual event. Ahead of the match, oblivious of the gathered crowd, his little son had fun kicking the football around in the stadium.

On the day of the football final, the two finalist teams walked down the bazaar road to the stadium, with their supporters – one team accompanied by a traditional Kumaoni band, the other by a school band. The small stadium was full of people. Houses nearby had people on balconies and roof tops just as they do for cricket matches in Mumbai. There were people watching from roads uphill and some poised on top of rocks. There was no dearth of flourish either for the final ended in a penalty shoot-out with goal keeper for hero, a trend that would repeat at World Cup matches weeks later. Interestingly, for a long time, the football here couldn’t accommodate teams of 11 players each due to lack of space. In 1970, with help from residents, the playground was enlarged. Team size went up from nine to 11.

Preparations for the annual tournament commence in April-May. People contribute; some financially, others help with the organizing. With so many landing up, it also becomes an occasion to meet friends and relatives. At heart, the tournament is a reunion.

The annual community reunion around sport in Johar, reminded of a similar event elsewhere.

Far to the south, in Coorg (Kodagu), there has been the tradition of an annual field hockey festival. It was started in 1997. In the past, the region has been famous for talented field hockey players and a typical tournament saw people who had played at state, national and international level turn up to represent their families (please visit this link: https://shyamgopan.wordpress.com/2013/08/22/field-hockeys-family-festival/). A difference between Johar and Coorg was – in Johar, team identity spanned roots in Johar for those from the diaspora and participating as visiting teams, to specific villages and institutions (schools for example) in Johar for local teams. Either way, it was link to a place. In Coorg, the idea of roots went deeper to teams arranged under family names.

(The author, Shyam G Menon, is a freelance journalist based in Mumbai. An abridged version of this article was published in The Telegraph newspaper)