Here’s a story originally published in 2013.

It has been updated for developments since then. 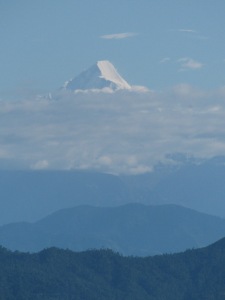 At 6861m, Nanda Kot is the highest peak in the impressive arc of mountains guarding the Pindari Glacier area in Kumaon. On the map, this place falls in the eastern half of the Indian state of Uttarakhand through which the Central Himalaya passes.

In 1989, a youngster from Kumaon’s Munsyari region – to the east of Nanda Kot and not far from the Nepal Himalaya – reached the summit of the peak with a team from Lucknow, the city where he studied.

Willing to do anything to be on a mountaineering expedition, he had literally worked his way to the summit doing all sorts of jobs for the expedition. Atop Nanda Kot, he was happy for mission accomplished. He had no idea of what lay ahead, for although at ease at altitude reaching thus far had been quite a journey for the young man hailing from Bona, a village 2200m up in the Kumaon Himalaya and roughly 35 km away from Munsyari. He knew he wanted to return to mountaineering but just then it all seemed too much for him. Certainly he doesn’t recall giving any special attention to the eastward stretch of the Himalaya moving into Nepal, where on the edge of that country and Tibet towered the world’s highest peak. 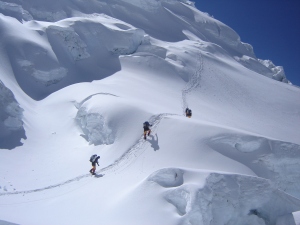 Nanda Kot was the young man’s first expedition. Life continued nondescript. He did his `adventure course’ from the office of UP Tourism’s Officer on Special Duty (OSD) in Uttarkashi (those were the days of undivided Uttar Pradesh [UP], when the yet-to-be Uttarakhand was still part of the large state of UP). The facility provided a taste of adventure to school students; teachers, young people. He worked there as a help earning Rs 75 daily. In 1990, he did his Basic Mountaineering Course from the town’s Nehru Institute of Mountaineering (NIM), following it up with courses in Advanced Mountaineering, Search & Rescue and Method of Instruction. In 1992, he found berth on an expedition to the 7516m-Mamostong Kangri in Ladakh. Returning from Ladakh he moved to the 6236m-Nanda Bhanar, reaching near the summit with an expedition from Lucknow. 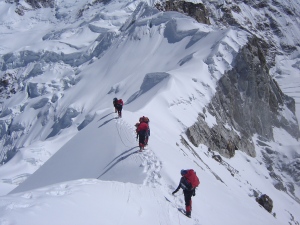 In 1997, the young man was Liaison Officer for a British expedition to the 6309m-Nanda Ghunti, led by Martin Moran. That trip exposed him to alpine style ascents which typically feature a small team with little hired help and climbers doing everything themselves. He then rushed to Gangotri where a team from Mumbai engaged in a set of pre-Everest climbs had asked him to join them. Their invitation is a complicated story, the crux of which was his role some time before in trying to retrieve the body of a Mumbai mountaineer. Eventually, the body was not retrieved but word reached Mumbai of the helpful young man. So, when Mumbai put together its first civilian expedition to Everest (Tata Group was the main sponsor) under the leadership of Rishikesh Yadav, our young man was made team member. Months later, in 1998, two summit windows would open up for the Mumbai team during their climb from the Tibet side. In the first, Surendra Chavan, then working for Tata Motors, would reach the summit of Everest (8848m). In the second, a young man, who almost ten years before had been on Nanda Kot stood at the world’s highest point. Expedition over, he returned to his job at the OSD. But Everest and Love Raj Singh Dharmshaktu had commenced a journey.

May 2013 marked sixty years since the first ascent of Everest by Tenzing and Hillary. In a world where people are introduced as `Everester so-and-so,’ Love Raj carried his life in mountaineering lightly on his shoulders. For one, he doesn’t call himself `Everester.’ He is very unassuming, walking casually with slightly stooping shoulders, at peace with the world – which was how he walked in to the office of the Indian Mountaineering Foundation (IMF) in New Delhi, March 2013. People said hello and as we sat in the cafeteria for an interview, an official wished him luck for an upcoming trip to Everest and requested him to look after the others too for he was by now among the most experienced climbers in India for attempting Everest. Should that trip happen, it would be Love Raj’s seventh shot at the summit. He was already the first Indian to have successfully climbed Everest four times. 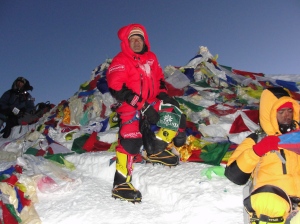 Everest is probably the best studied 8000m-peak. `Wired’ should be the word, for its normal climbing routes have been so well mastered by commercial agencies that save for vagaries of weather and the trade’s own avarice causing congestion and accidents on the mountain, well performing clients are nearly assured of a summit. An Assistant Commandant with the Border Security Force (BSF), some of Love Raj’s successful ascents were on the normal route. But look closer and it isn’t that simple. He tried and lost on the less wired tough routes. Point is – he tried. In 1999, noted mountaineer Santosh Yadav led an Indian expedition to Everest’s Kangshung Face, among the toughest mountain faces in the world. Love Raj was part of it. Between Camp 2 and Camp 3 he was hit by a falling stone that smashed his goggles and injured his eye. He had to be evacuated. In 2001, Loveraj was back on Everest, again on a route on the East Face in a team led by Santosh Yadav. The team got to the highest point yet reached on that route, he said. Meanwhile with the BSF, he climbed Satopanth (7075m), Kamet (7756m), Mana (7274m) and Abi Gamin (7355m). In 2006, he reached the top of Everest with a BSF expedition. In 2008, on another BSF expedition, he successfully climbed Kanchenjunga (8586m). In 2009, as climbing leader on NIM’s Everest expedition, Loveraj reached the summit for a third time. His fourth time on the summit of Everest was in May 2012, part of the Eco Everest Expedition organized by Nepal’s Asian Trekking with a berth for himself sponsored by Woodland, the well known shoe and apparel brand. On this trip, one that also cleaned up the mountain, Love Raj did more than the regular clean-up procedures, picking up garbage even from the approaches. He also attempted to climb without using bottled oxygen but eventually submitted to its use from higher camps. 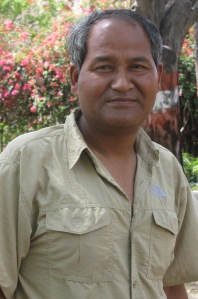 A superlative known worldwide, Everest attracts for the glory it promises. Successful climbers become famous. Pay Rs 13-15 lakhs (1300000 to 1500000), another Rs 2.5 lakhs or so for equipment – all this is accessible, courtesy a commercial trip. This has diluted the sheen of Everest. However from a climber’s perspective, Everest is any day challenging and particularly challenging along its less climbed faces where few trophy hunters go. For example, Love Raj believes that Kanchenjunga is a technically difficult (he also loved its isolation with no other team around) but safer climb than Everest. Accounts of Everest’s East Face are replete with avalanches and seracs while on its normal route lay the Khumbu Icefall. So why does he keep going back? Love Raj attributes that to a desire to test himself, Everest being well known (he doesn’t deny that) and the fact that some of the opportunities he got were to climb from less attempted faces. Both the East Face expeditions, he said, progressively leached fear away from him as he improved his technical skills. Most important, Love Raj credits his good fortune at being able to visit Everest repeatedly, to his humility, born from a hard life in the mountains. “ I struggled in life. No work on any expedition was below my dignity to do. That baked my character and even now I don’t hesitate to do any work on an expedition. I know struggle and I know when someone else is struggling,’’ he said. Asked for his impression, Rishikesh Yadav, who led the 1998 Everest expedition described Love Raj as “ tough, dedicated and resourceful.’’ Love Raj is a recipient of both the IMF Gold Medal and the Tenzing Norgay Adventure Award. 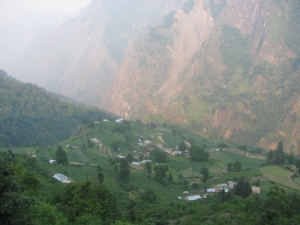 Interview over, we had lunch at a restaurant nearby. I found that Love Raj had turned forty just the previous day. He talked affectionately of his new born son. His wife Reena is a mountaineer, an outdoor educator (she has worked with the US based-National Outdoor Leadership School [NOLS]) and the first Indian woman to ski to the South Pole. Life had come a long way since Nanda Kot. On the evening of May 21, 2013, I chanced to call up Reena in Delhi. According to her, early that morning, around 6 AM, Love Raj reached the summit of Everest; his fifth successful climb to the top of the peak. The news arrived through agencies in Kathmandu, she said.

In 2014, Love Raj was one of the recipients of the annual Padma awards for civilians, given by the central government. He got a ` Padma Shri.’

For all that happened since 1989, he doesn’t recall paying any special attention to the eastward stretch of the Himalaya, from the top of Nanda Kot.

He had been just happy for first mountain summit reached.

Please note: the height of peaks are as mentioned in Wikipedia and the Himalayan Club Journal.

(The author, Shyam G Menon, is a freelance journalist based in Mumbai. This article was originally published in 2013 in The Hindu newspaper.)