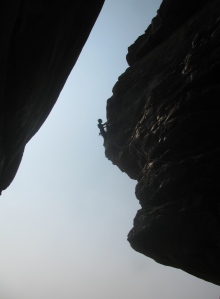 This article in three parts is a composite of two distinct narratives, one in normal text and the other, in italics.

The story of Badami is as layered as its sedimentary rock.

If you are used to the Himalaya or even the Western Ghats, then, on the approach to Badami from Hubli, you wouldn’t expect anything that hints `hill.’ The world is flat and open to the sun. Vegetation is the stuff of hardy scrubs; large fields, still standing patches of sunflower, dry sugarcane and the occasional tree. Massive bony oxen pull carts; buffalos saunter by, dogs have their tongues hanging out trying to stay cool. It is hot. Sun burnt farmers, old women with dry wrinkled skin. Tractors join the traffic. Dust rises easily. It is January. I can imagine what peak summer would be, here. More important for climber, there is not an iota of hill anywhere. Then at one bus stand en route, you see an isolated rocky outcrop next door. Slowly, as the bus moves on, you start seeing similar isolated outcrops, at best a long wall and all no more than a few hundred feet high. Reach Badami and the rock walls there are high but not tremendously so. They are beautiful. Badami’s story lay in the subtext. If the Himalaya is famous for its marine fossils, dating back to the ancient Tethys Sea, then here, it is the other extreme.

According to Dr Shrinivas V. Padigar, Head of the Department of Ancient Indian History and Epigraphy, Karnatak University, Dharwad, the rock at Badami contains no fossil record as it dates back to the Precambrian period, or simply put, a time when no complex life forms existed. Accounting for roughly 7/8th of Earth’s history, the Precambrian period ended around 540 million years ago. Respect for Badami’s rock thus stems from a dimension different from physical properties. It is frozen time. To imagine such antiquity, you should take a peek at the shape of continents and where India was in the Precambrian period. If the world’s highest mountains – the Himalaya – were formed after India drifted at a speed that is superfast by continental drift standards and smashed into the Eurasian plate, then the India of the Precambrian period hadn’t dreamt the Himalaya. India’s northward drift started only 140 million years ago. The Himalaya, the child of India’s collision with Eurasia, is much, much younger.

Simply put, the rock at Badami is OLD.

Both places are in Karnataka, South India.

They are separated by 146 kilometres, small enough for climbers fuelled by passion, to cover for a taste of both worlds. Hampi is strongly identified with bouldering, the art of climbing boulders with little gear – just a pair of climbing shoes, crash pad to cushion one’s fall, chalk to keep the hands sweat-free and a friend to `spot’ you. Badami has bouldering plus a wealth of longer routes for sport climbing, which entails rope, pre-fixed bolts in the rock, more climbing gear than used in bouldering and definitely a second climber to `belay.’ Badami offers beautifully weathered sandstone (we call everything here sandstone but as geology shows, it is more complicated). Badami’s stone is kind on climbers’ fingers. Climbing in Hampi is done on granite. It shreds skin.

Badami has several popular climbing areas. From past visits, I remember crags named Indian Alley, Ganesh Plateau, Temple Area and Badami Deluxe. Today, at any one of these known climbing spots, you will see several bolted sport climbing routes. N. Ravi Kumar, who hails from Bangalore and is currently Director of NOLS India, was among the early climbers frequenting Badami. According to him those days, there was nothing on the approach to the Badami Deluxe and Temple Area crags, save a house and the small facility of the General Thimayya National Academy of Adventure (GETHNAA). Where several shops and houses now stand there was nothing. All the initial climbing was traditional (trad) in style, using removable protection as opposed to permanent protection. “ There were no bolts then,’’ he said. It changed with sport climbing’s ascent in India. One of the great attractions of sport climbing is that thanks to prefixed protection (expansion bolts), climbing lines are possible on rock faces otherwise devoid of adequate features to host trad gear (an overview of the various styles in climbing can be had from the September 2013 post Climbers in the Big Wall Mirror [Part Two]. It can be accessed either through the blog’s archives or simply click on this link: https://shyamgopan.wordpress.com/2013/09/).In turn, that makes moves in sport climbing pretty difficult because tackling potentially sketchy rock faces is built-in into the ethos of this discipline. 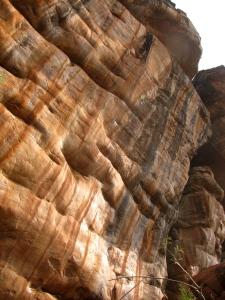 In late January 2014, as I stood in Badami facing the orange glow of its sandstone rock walls, my attention was on a rock overhang far to the right near the Temple Area crag. Bit over one kilometre from the local bus depot, tucked into the curve of the rock was a sport climbing route called Ganesha, sometimes, Ganesh. In climbing, routes have names. Graded 8b+ in terms of climbing difficulty on the French scale, Ganesha was right then the toughest among known, graded sport climbing routes in India. Ganesha was bolted some years ago by Alex Chabot, a champion climber from France. Its first ascent happened probably in 2011; the credit went to French climber Gerome Pouvreau. In Rohit Chauhan’s guidebook to climbing in Hampi and Badami, Ganesha’s grade was speculated as 8c or 8c+. This publication was the first guidebook for this area. Rohit recalled it as a rather lonely endeavour. Encouragement and support came from just a handful of people. A few overseas friends and Delhi-based climber-businessman, Mohit Oberoi, backed him. At that time however, Ganesha was yet to be fully climbed. Rohit said in a recent email from Spain that he had to count on estimation by others familiar with the Ganesha project, for a sense of the new route’s grade. As often happens in climbing, there is a gap between the perception of a route in project stage, and reality. The right grade is a consensus among climbers who climbed the route fully. Multiple ascents over a period of time then lower the grade. 8b+ is what Ganesha earned after first ascent; it is what it still has for grade.

The rocky hill dominating Badami’s landscape is part of the ` Kaladgi Series’ stretching from Kaladgi to Gajendgragad – that’s what I gathered locally. The most ancient of the rocks in this region is probably the batch of sedimentary rock in the vicinity of Kuligeri Cross, a place that you pass by en route to Badami. For a lay person like me seeking to know Badami, the age of the rock is however only one half of the fascination. As climber, the Badami rocks are my favourite. Something about them matches the enjoyment from climbing and the engagement with rock, I seek. But I am no geologist. I don’t know how to distinguish a rock of recent origin from Precambrian. My perception as I climb is tactile; touch and feel. Badami’s rocks are like fine sandpaper yet firm. Plus, they are wonderfully eroded into all sorts of cuts, grooves, pockets and jug holds, not to mention – slippery smooth in some areas. In popular lore, the agent that caused all this – from sedimentation to sculpting – is said to be water with one theory being that this area was below water once. Today’s Badami is quite inland from the sea (it is approximately 250 kilometres by road from Goa on India’s west coast); it is also 1923 feet up from sea level. There is even a rock arch of sorts, the remains of powerful weathering, some say by water – you can see its scaled down model in the local archaeological museum. How and where do we position water in Badami’s geological history?

I contacted Dr Navin Shankar, a geologist now working as Research Specialist with Excelsoft Technologies Pvt Ltd, an e-learning company in Mysore. According to him the Badami rock formations date back to the Proterozoic era, around 1.6 billion to one billion years ago. Within the Precambrian (4.6 billion years ago to about 540 million years ago), this would qualify to be in the second half. The Proterozoic period is divided into three stages. The time of formation of the Badami rocks corresponds roughly to the middle stage – the Mesoproterozoic, noted as the first age from which a fairly reliable record of the Earth’s geological history survives. Wikipedia describes this period as still poorly understood despite critical changes to the chemistry of our seas, the sediments of the earth and the composition of air. It is also the dawn of life, the age of development of sexual reproduction in micro organisms, very important for complex life forms yet to come.  And if you thought ` life’ here means life as we know it, please note: oxygen levels of the time may have been about one per cent of today’s and slowly rising. It was a very different Earth.

Badami as seen from the top of the adjacent hill (Photo: Shyam G Menon)

The north and north-eastern segments of peninsular India had witnessed mountain building activity in the Mesoproterozoic period. This involved subduction of the margins of plate boundaries complemented by intraplate extensional tectonics resulting in the formation of a series of intracratonic basins, namely the Kaladgi formation. As per information on the Internet, intracratonic basins are a type of sedimentary basin. They form within stable continental interiors. They are typically shallow, circular in shape and have long histories of relatively slow subsidence. Over time, the intracratonic basins were overlain by sedimentary rocks and sediments. “ The rocks from the Mesoproterozoic age in the Badami area have been categorized under the Kaladgi Supergroup, further classified into Badami and Bagalkot groups,’’ Dr Shankar said. The Badami group comprises horizontally bedded multiple sequence of arenite and shale with limestone in small amounts. These sedimentary rocks and sediments are found in a large area of horizontally bedded ferruginous arenites from the north-western tip of Raichur district to Bijapur, Belgaum and beyond into Maharashtra state. The Bagalkot group consists of two mega cycles of repeated sequence of argillite followed by chemogenic precipitates predominantly of sandstone and dolomite with quartzite and conglomerate forming the base.

Standing in today’s Badami, it is hard to visualize this geological story. It is flat all around with a few rocky hills. Where are the sedimentary basins? To notice the ancient basins, which can be several kilometres long and wide, we have to get a bird’s eye view; a topographic picture of the region. In that, Dr Shankar said, the basins emerge. Further, some basins are now below the layers accumulated on top. By nature basins are depressions and water collects in depressions. The basins may have held water in the ancient past contributing to the submersion story. However in the vast scale of geological time, water isn’t sole agent forming, compacting and sculpting sedimentary rocks. Theoretically, wind and glaciers also perform that function although glaciers had no role in Badami. Into this, mix a later development. Badami now stands on the Deccan plateau. This large plateau formed around 60-70 million years ago through volcanic eruptions lasting several thousand years, some say, when India drifted over the Reunion Hotspot. The Deccan is a massive feature, much younger than Badami’s rocks but one that adds to the geological influences a scientist must sift through to understand still older times.