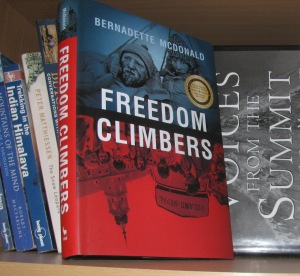 The man before me was of average height.

He was in good shape, shoulders thrown back, legs set firm to the ground.

His eyes were the sad-calm of someone who had seen a lot.

He spoke English, choosing words carefully yet amusingly for he had a sense of humour.

We sat down for an interview that I never published because I didn’t know enough of his incredible life. Just the previous day, I had heard him lecture at the Himalayan Club in Mumbai. It was funny, peppered with jokes despite the gravity of his exploits and the people he knew in his chosen field, famously called `the art of suffering.’. I could ask questions that make him repeat his lecture. That would be stupid. His life and that of his friends were central to a book. But with that book not yet out when this meeting happened months ago, my homework was zero.

What do I ask?

I set my notepad on the table and carefully kept my pen alongside.

Then I looked at his face, smiled and took a deep breath.

Oxygen is good for the brain.

And what’s good for the brain may help birth a question – I thought.

The man before me was one of two people who climbed Everest for the first time in winter. That was in 1980. Long before that, when the first climbing expeditions approached Everest in the early part of the twentieth century, it had been via Darjeeling. I remembered previous visits to Darjeeling and Ivanhoe. Not Sir Walter Scott’s novel but a quaint heritage hotel with the same name. At its reception, the hotel kept a synopsis of its history, counting among past guests, the famous Hollywood actress Vivien Leigh and George Mallory, the British mountaineer who famously disappeared on Everest. However Darjeeling’s signature view is the giant massif of Kanchenjunga, India’s highest mountain and the world’s third highest. Years ago, my first trek had been to Dzongri in nearby Sikkim, from where you got a closer view of this peak.

Wanda Rutkiewicz was among the greatest woman mountaineers. She fought everything from unyielding mountains to male domination in climbing, all this while her own personal life was sufficiently tumultuous to cripple any of us. Akin to Everest’s first ascent coinciding with the coronation of Queen Elizabeth II in England, Wanda’s ascent of Everest coincided with the installation of Pope John Paul II at the Vatican. He hailed from Poland, where Wanda was born. On a quest to be the first woman to ascend the world’s fourteen 8000m peaks, she was last seen high up on Kanchenjunga. Wanda and four others – Jerzy Kukuczka, Wojtek Kurtyka, Krzysztof Wielicki and Andrzej Zawada – dominate the narrative of `Freedom Climbers’ written by Bernadette McDonald. The book I should have read before the interview I was attempting, it focused on a phase in the 1970s and 1980s, when Polish climbers roamed the Himalaya establishing difficult climbing routes and winter ascents. They were the toughest climbers in the Himalaya.

Speaking in Mumbai in early 2013, Bernadette said that the book had been a challenge to publish as it was perceived as a niche within a niche. She traces the Polish assault on Himalayan peaks to a Poland invaded by Germany and Soviet Union, the brunt of World War II in Poland and eventually the oppressive Communist regime that ruled the country after the war. It shaped the psychology of a people. The country’s mountaineers cut their teeth on the Tatra Mountains. In pure altitude terms, this may seem very modest for the highest point is only 8710 feet up from sea level. Except, the Poles were putting up tough routes and winter climbs. Their quest for higher mountains brought them to Afghanistan adjacent to the erstwhile Soviet Union. Afghanistan was then under a regime friendly to the Communist Block. Slowly, they advanced to Pakistan, India and Nepal. By the time, the Poles reached the Himalaya most of the major peaks had been climbed by other European countries. To leave a mark uniquely their own, the Poles started climbing some amazingly tough routes besides transplanting to the Himalaya, their habit of winter ascents. Interestingly, the Polish reign in the Himalaya – when they climbed as though to compensate for what history had denied them – was strong during the times of controlled market and politics. It faded as Poland moved to free market and democracy. Today, Polish teams are still at work completing some of the mountaineering agendas born in that past, like climbing all the 8000m peaks in winter. But the mantle of ferocious climbing has moved on as though the country found peace yet turned soft with free market economics.

Does the state of its economy influence a country’s alpinism?

One day in 1996, at the end of climbing season, my subject for interview had arrived alone at the base of Nanga Parbat (8126m) in Pakistan and asked some villagers for directions to a particular line of ascent up the peak, often called `The Killer Mountain.’ The villagers thought he was crazy. Famous for speed ascents in his generation, the man heaved a rucksack to his back and another to his front and climbed the peak solo. Nanga Parbat completed his climb of all the fourteen 8000m peaks. He was the fifth person globally to do so.

Krzysztof Wielicki smiled encouragingly as I struggled for the right question to start the interview.

(The author, Shyam G Menon, is a freelance journalist based in Mumbai. A slightly abridged version of this article was published in The Hindu Business Line newspaper.)